Now there is this Biden And Obama Sticker that you can use to make it clear to people who you like.

If Barack Obama was the President of your choice and you would like Joe Biden the President then this sticker shows that they like each other too.

This sticker is heart shaped and on it you can see Obama and Biden sitting next to each other having a good laugh and it does make you wonder what they are laughing about.

You can get this Presidential sticker in different sizes and you can choose between matt, gloss, or with a transparent edge.

This vinyl sticker will look great on almost anything from the back of you car to your computer or water bottle.

Get your Biden And Obama Sticker

Give a former President a place in your home and maybe start with this 2020 Barack Obama Wall Calendar.

This wall calendar will make you smile just because all the nice photo’s you find images of Barack Obama show you a person that has a positive outlook in life.

Each month of 2020 you will get a nice new photo of Obama so that every month you will be remembered about what kind of President he was.

Besides the images, there is a nice big calendar grid each month with plenty of room for important things to you like friends birthdays and you are in luck as they already printed all the major holidays and other important days on the calendar.

Get your 2020 Barack Obama Wall Calendar

If you want to make Barack Obama happy then you need this chia pet that is a bust of the first black US President and he seems so happy.

We talked about a Barack Obama Chia Pet before bat that one was just formal but now he looks happy and maybe it is because he soon will be no longer the president or because he is getting green chia hair.

The bust of Barack Obama is just perfect for growing hair. Wet the bust and put the seeds on his head and soon he will have the perfect green hair.

And when Obama is done growing hair then you can do it again as included are enough chia seeds for a couple of growings.

This round finback button is all about President Obama.

The button is 1.5″ in diameter and shows a photo of Barack Obama and he seems in deep thoughts about something and that could be as simple as getting world peace or as difficult as in deciding where to put the pinback button.

You can put the Obama pin on your jacket, backpack or even just your shirt.

So if you prefer Obama over all the others then don’t wait and pin it up.

Get your Barack Obama Pinback Button

The Obama action figure features a sharply dressed president in a grey suit with a blue tie. With very intricate facial features there is no mistake that this is Barack Obama.

Standing 6 inches tall this action figure features 8 points of articulation. So now you can pose Barack in many different ways.

Attention collectors! The Barack Obama action figure comes in a window box package so you can keep it in mint condition. The package is decorated in the art work from the Obama “Hope” campaign.

Get your Barack Obama Action Figure

Barack Obama is the 44th President of the United States of America. When you are the President, the highest form of flattery must be having a Chia Pet created that looks exactly like you.

This Chia Pet is Barack Obama’s head on a rectangle block that says “Barack Obama 44th President”and “Yes We Can” written on it. His face is made perfectly and looks exactly like him, well except for the green hair after 1 or 2 weeks.

Barack Obama measures approximately 8 inches by 4.5 inches by 7 inches. It is small enough to have on display, but makes for a big impression. It will get the conversations going.

Get your Barack Obama Chia Pet For You

President Obama is the first black president of the United States Of America and that of course is an important event that we should not forget.

And maybe that is why this t-shirt is perfect for you so that you can keep showing a nice portrait of Barack Obama.

You can get this Obama t-shirt in many colors and in styles for both men and women. Made from 100% cotton this t-shirt will feel great when you wear it so now it’s just up to selecting the right size for you President Obama t-shirt. Just pick a size between Small and 6XL and you are are all set.

Get your Barack Obama Portrait T-Shirt 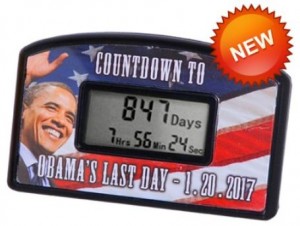 You can be a Barack Obama fan or you may not be such a fan, it does not matter when it comes to this multi purpose clock.

This clock features a face plate that has the red, white and blue American flag with a picture of the President of the United States Of America Barack Obama smiling and waving, also the text of “COUNTDOWN TO OBAMAS’S LAST DAY – 1.20.2017” and a digital screen.

The digital screen shows how many days, hours, minutes and seconds left in Barack Obama’s presidency and it will also act as a regular clock so even when his term is done no worries. 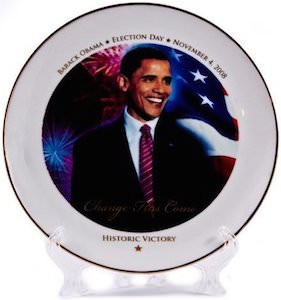 Now you plate collection can have a  President Barack Obama plate.

This Commemorative plate is 10 inch in diameter and shows Obama in the middle with the Stars and Stripes flag and fireworks in the background. Besides the President Obama picture the plate has a white border that says “Barack Obama Election Day November 4 2008, Historic Victory”.

And this maybe a real ceramic plate it is for decoration only. If you wanted to eat of a plate with the US President on it then this is not the plate to use.

A historic moment can now be part of you plate collection and I am sure that you can give this President a special place. 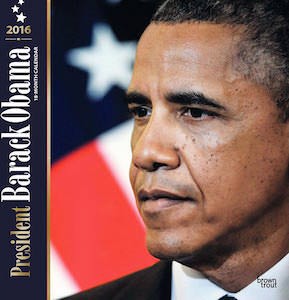 If you are looking for a nice calendar that shows one of the world leaders then this 2016 President Obama calendar could be perfect for you.

The calendar shows a new amazing photo of the United States President every month of the year so that you can enjoy the first black president on your wall for the whole of 2016.

The President Barack Obama calendar is made by Brown Trout.