You can be a Barack Obama fan or you may not be such a fan, it does not matter when it comes to this multi purpose clock.

This clock features a face plate that has the red, white and blue American flag with a picture of the President of the United States Of America Barack Obama smiling and waving, also the text of “COUNTDOWN TO OBAMAS’S LAST DAY – 1.20.2017” and a digital screen.

The digital screen shows how many days, hours, minutes and seconds left in Barack Obama’s presidency and it will also act as a regular clock so even when his term is done no worries.

If you liked David Tennant as Doctor Who then you gone love this wrist watch.

The watch has a silver toned case and a barrel design with a leather band. And then there  is the watch face that shows the numbers 3, 6, 9 and 12 but it’s all about what is behind there that counts and that is a picture of David Tennant wearing a blue suite and behind him the galaxy and the Tardis that he used to travel in when he was the 10th Doctor.

David Tennant or Doctor Who fans both will love this classic time piece so why not add one to your collection. 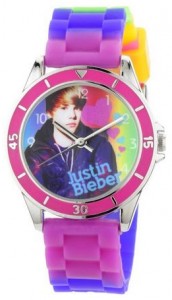 This youth watch features a picture of hunky Justin Bieber in the center of the watch under the numbers and hands of the watch. The band is full of color and looks to be a tie dyed design.

It has a round silver case and the silicone band has 8 holes and a silver buckle closure. The face of the watch measures 1.3″ in diameter.

Show your young one that you recognize their Bieber Fever with this time piece.