The party can start because now there are Snoop Dog Party Coasters.

If you like Snoop Dog and you hate marks on your coffee table or maybe your desk then this coaster is what you want.

The Snoop Dog coasters come in a pack of 4 and have a cork backing so that they don’t damage your table while looking fun.

And you can see the coaster shows a fun image of Snoop Dog and he seems to be happy to be your coaster but I just imagine that based on the big smile he has.

The coasters are 4 x 4 inches making them the perfect size for most glasses and mugs.

Get your Snoop Dog Party Coasters

If you want something to put your glasses and mugs on then check out these Freddie Mercury Coasters.

The coasters come in a set of 4 and are masonite board with cork backing and on it you can see a black background with on it a cool picture of Freddie Mercury while singing.

The coasters are great for on your table and just perfect for keeping your table clean from wet marks.

And if you like the design of the coaster but would like Freddie on a different product then click on the picture as you can get this design t-shirt, dress, stickers, phone cases and much more.

Get your Freddie Mercury Coasters

Now there is this Elvis Presley Coaster Set which will look great in your home and prevents those ugly marks on the table.

If you like Elvis and need coasters then you really want to check out this set as it has 4 coaster in it that are 4 x 4 inches and each has a different image of Elvis Presley on it and all are in black and white and some show him performing.

A coaster set like this is a great piece to have if you are a big fan of Elvis and don’t really like the rings mugs and glasses leave on your table.

Get your Elvis Presley Coaster Set

This Christmas you won’t have ugly drink marks on your table thanks to this coaster with Marilyn Monroe and Elvis Presley on it.

The coaster comes in a set of 6 and shows Monroe and Presley in Paris with the Eiffel Tower in the background and many Christmas details fo make it all perfect as part of you holiday decorations.

And the Christmas coasters are 4 x 4 inches and will look stunning on the table and people will comment on how special they are.

Invite Elvis Presley and Marilyn Monroe to your home this Christmas in the form of these fun Christmas coasters.

Get your Elvis And Marilyn Monroe In Paris Christmas Coaster 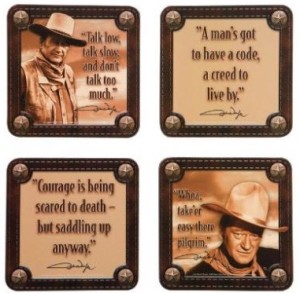 John Wayne is one of the most famous stage cowboys of all time. His acting was so well known, but he was also a great director and producer. Between the years of 1926 and 1979, John Wayne was in 170 films and became one of America’s greatest Box Office actor.

There are 4 coasters in the set. 2 have John Wayne’s picture with quotes and 2 have only quotes. The four quotes are; “A Man’s got to have a code, a creed to live by”, “Courage is being scared to death – but saddling up anyway.”, “Talk low, talk slow and don’t talk too much” and “Woah, take’er easy there pilgrim”.

They are in a sepia color scheme and they have cork backs to make them non-slip, each of the coasters measure 4 inches by 4 inches.

Bring a little of the old school cowboys into your home and keep your tables looking like new.